Since it seems like “election night” will probably drag on for a few more days, at least, here’s another round-up of my election thoughts and reactions. Part 1, from last night, is here, in case you’re interested.

Election-related updates through the day.

I am equally angry and delighted with this.

And this is the way it ends.
Not with a bang but with a WI/MI/PA.

Yes, his lead is “magically” disappearing as we finish counting all the votes. 🙄

Absentee/mail-in votes are legitimate, legal, and trend blue. He’s trying to cast doubt on legit votes and steal the election.

Because Democrats voted early and by mail, but we count mail-in/absentee ballots last. We didn’t have to count them last – a lot of states wanted to start counting them earlier, but the garbage GOP wouldn’t let them.

All the major networks carried Trump’s address at the start, but NBC News and MSNBC cut into it to note that he was peddling falsehoods.

“We’re listening to the President speaking at the White House, but we’ve got to dip in here because there have been several statements that are just frankly not true,” NBC News anchor Savannah Guthrie said as the network broke away from Trump’s remarks.

On MSNBC, Brian Williams told viewers the network was “reluctant” to interrupt the President’s speech, but said Trump’s remarks were “not based in the facts at all.”

The other major networks carried Trump’s speech in full, but aired forceful fact-checks after it had concluded.

The GOP has been working at least since Nixon to build the fascist version of America. That’s 50-some years of hard, careful work to build an electorate that accepts fascism without recognizing it. No matter what happens in the next few days, we were never going to beat that with one or two elections. We were never going to beat that all in one night. A lot of people were hoping for a stunning repudiation, and that just wasn’t in the cards.

About half of America is either totally on board with the GOP’s white supremacist fascism or is at least willing to enable it to get what they want. Tax cuts or some shit, I dunno. Same as makes no difference, really.

We were never going to get that cathartic landslide repudiation that we wanted. And that sucks. We would very much like to declare “WE WIN!” and then all go home, kick up our feet, and never think about this shit again. That’s just not how life works, I’m afraid. This was always going to be a squeaker, assuming it breaks our way.

The fight for progress is never going to be over. We will always be fighting to push ourselves forward. When you fight for progress, you’re fighting for one slow step after another, and it never feels like you’re winning. But we are. One step at a time. And sometimes we get pushed back, and sometimes we leap forward, but it’s always mostly a slog.

So no, we’re not going to get our cathartic landslide win, and we were never going to, but it seems likely that we’ll at least get another step forward. And I dunno about the rest of y’all, but I’ll pop a champagne cork for that happily.

The race was seen as key to Democrats' hopes to win control of the Senate. https://t.co/j5Rdd3ac5E

And now they begin trying to steal the election.

President Donald Trump’s campaign said Wednesday that it filed suits to halt the counting of ballots in Michigan and Pennsylvania, as the campaign demanded increased access to observe the tallying process at numerous locations in those battleground states.

NEW: Trump campaign just moved to intervene in the Pennsylvania election case about counting ballots postmarked by Nov. 3 but arriving later. SCOTUS declined to expedite the case 1 week before the election but left room to revisit. https://t.co/b1MO1K4wK8

"We are declaring a victory in Pennsylvania," Trump campaign manager Bill Stepien says on press call

Read Celeste Pewter and her thread here. She’s tracking this garbage and providing advice and tactics for resisting Trump’s attempts to steal the election.

Agitators in Michigan are trying to stop the vote count. I’m pretty sure this is happening in Pennsylvania, too, but I can’t find the tweets again.

#BREAKING: Large, animated crush of “stop the count” protestors trying to push their way into TCF hall in #Detroit where ballots are being counted.

They’re being blocked by guards at the door.

The scene at Detroit’s absentee ballot counting center is growing more heated. The windows now being covered up. Allegations of violations. Sec. of State says she welcomes challenges. pic.twitter.com/oUL4A0h3Ku

Eric Trump, Kayleigh McEnany, and the Team Trump account are all falsely claiming victory in Pennsylvania. That's not a thing. Pennsylvania is still counting ballots. No one has won.

These tweets – along with everything else Trump’s tweeted today – are basically meaningless bologna and desperate flailing.

It should be noted here that NPR hasn’t called Michigan for Biden yet, but both NBC and Fox have. So, for whatever that’s worth. Also, Arizona should update results around 9pm (EST), Georgia thinks it’ll be done sometime today, Nevada doesn’t think they’ll have results until noon tomorrow, North Carolina’s still accepting ballots until 11/12 so who knows, and Pennsylvania thinks it’ll have everything counted by Friday. 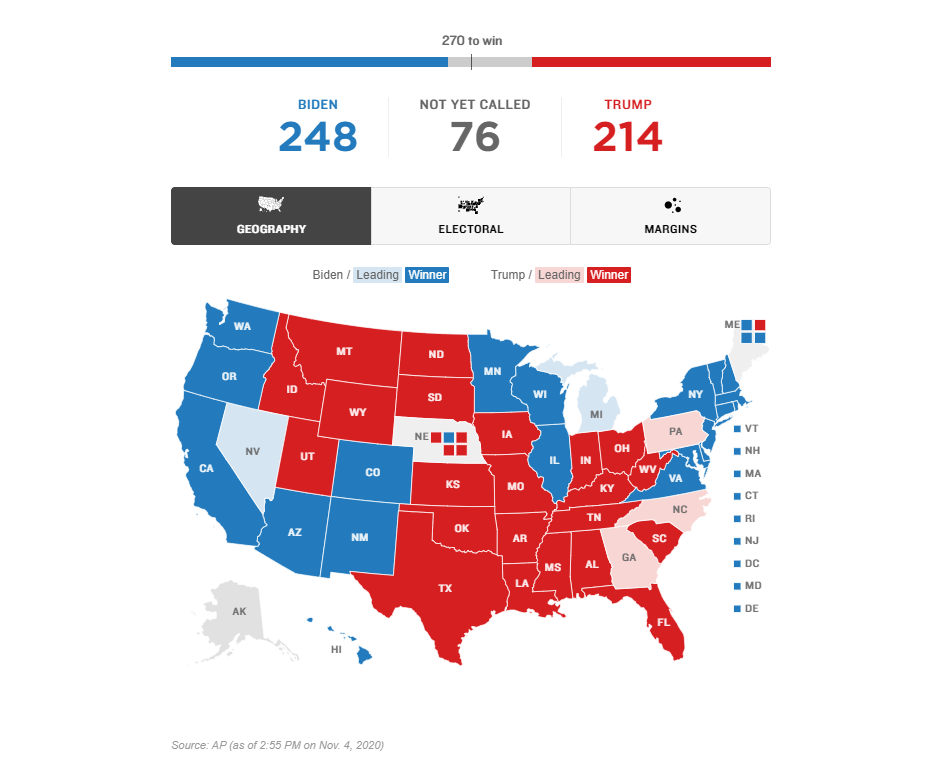 NPR and the AP have called MI for Biden now, too. Biden is 6 electoral college votes from the win.

The Associated Press has called Michigan for Joe Biden, adding 16 electoral votes to the Democratic nominee’s column. The state marks his second success in rebuilding the “blue wall” around the Great Lakes. Wisconsin was called for Biden earlier Wednesday.

Judd Legum of Popular.info has a quick Twitter thread on Trump’s lawsuits in Wisconsin, Michigan, and Pennsylvania, and why they’re frivolous and baseless. Trump’s also filed a lawsuit in Georgia to stop the vote counting. Not sure that’s gonna go anywhere, either.

In Georgia, Trump’s leading by .6%, with about 78,000 ballots yet to count, I believe, from mostly blue areas. From CBS News:

Greg Bluestein is a political reporter for the Atlanta Journal-Constitution (AJC).

It’s 11 p.m. in Georgia and 28 hours since the polls closed — and the race for president continues to tighten. We’re looking at a roughly 32k gap between Trump and Biden here – with about 78k absentee ballots still outstanding. #gapol pic.twitter.com/JjgTClwbni

🔗 AJC: Thousands of absentee ballots still need to be counted in Georgia

About 78,000 absentee ballots remained to be counted in Georgia Wednesday night as Joe Biden pulled within about 32,000 votes of President Donald Trump.

Most of these uncounted absentee ballots are concentrated in highly populated areas, led by Fulton County in Atlanta and Chatham County in Savannah.

Meanwhile, in Maricopa County, AZ, Trump supporters have gathered to protest vote counting at the elections building. They’re chanting things like “Fox News sucks!” (true that) and something about counting votes. (There’s been some mixed messaging, with reports of both “count those votes” and “stop the count” being reported.) Folks in the building are getting a bit worried, and I think they’ve started calling for extra security?

I guess the Maricopa County sheriff’s office is getting pretty touchy about the situation.

Maricopa County Sheriff’s deputies now ready in tactical gear inside the elections center to potentially make a move on the protesters and demonstrators outside as the crowd continues to grow. #azfamily #arizona pic.twitter.com/XAhvE1hbIK

Trump protesters were raising a ruckus in Nevada, too, apparently.

As far as I can tell, the pro-Trump protests in Detroit earlier petered out pretty quick, and the Nevada protest seems to have ended as well, but the Arizona protest is still going, I think.

Well, it seems like outside of reports general unrest we’re unlikely to get anymore news tonight. None of the interesting states seem to be ready to break any news. Drain your glass and get to bed, folks.