Who’s Paul Sperry and why did Trump spend like an hour maniacally retweeting everything the guy’s tweeted? 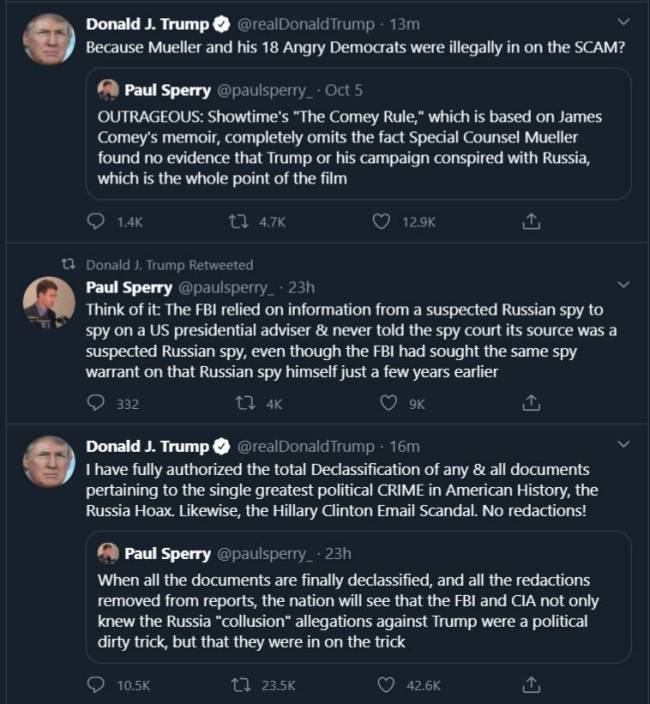 Trump apparently ran out of Sperry stuff and started retweeting whatever wild thing bubbled up that supports his conspiracy theories/lies.

I mean, I dunno if he’s running a giant fever, or if this is because of whatever meds they’ve got him on, but he seems more unhinged from reality than usual.

Finally this evening his… manic phase? I guess? wore off and he tried to do some take-backsies on his hostage situation tweets.

The House & Senate should IMMEDIATELY Approve 25 Billion Dollars for Airline Payroll Support, & 135 Billion Dollars for Paycheck Protection Program for Small Business. Both of these will be fully paid for with unused funds from the Cares Act. Have this money. I will sign now!

If I am sent a Stand Alone Bill for Stimulus Checks ($1,200), they will go out to our great people IMMEDIATELY. I am ready to sign right now. Are you listening Nancy? @MarkMeadows @senatemajldr @kevinomccarthy @SpeakerPelosi @SenSchumer

And then he went back to retweeting conspiracies. This wild little episode went on for a few hours this evening.

Entirely aside from the fact that I hate Trump and think he shouldn’t be president to start with – I don’t think anyone should be presidenting in this condition. Don’t we have a whole amendment to prevent this sort of thing?