I worked in restaurants for like 15 years, but what I’m about to tell you is true pretty much for the whole service industry. 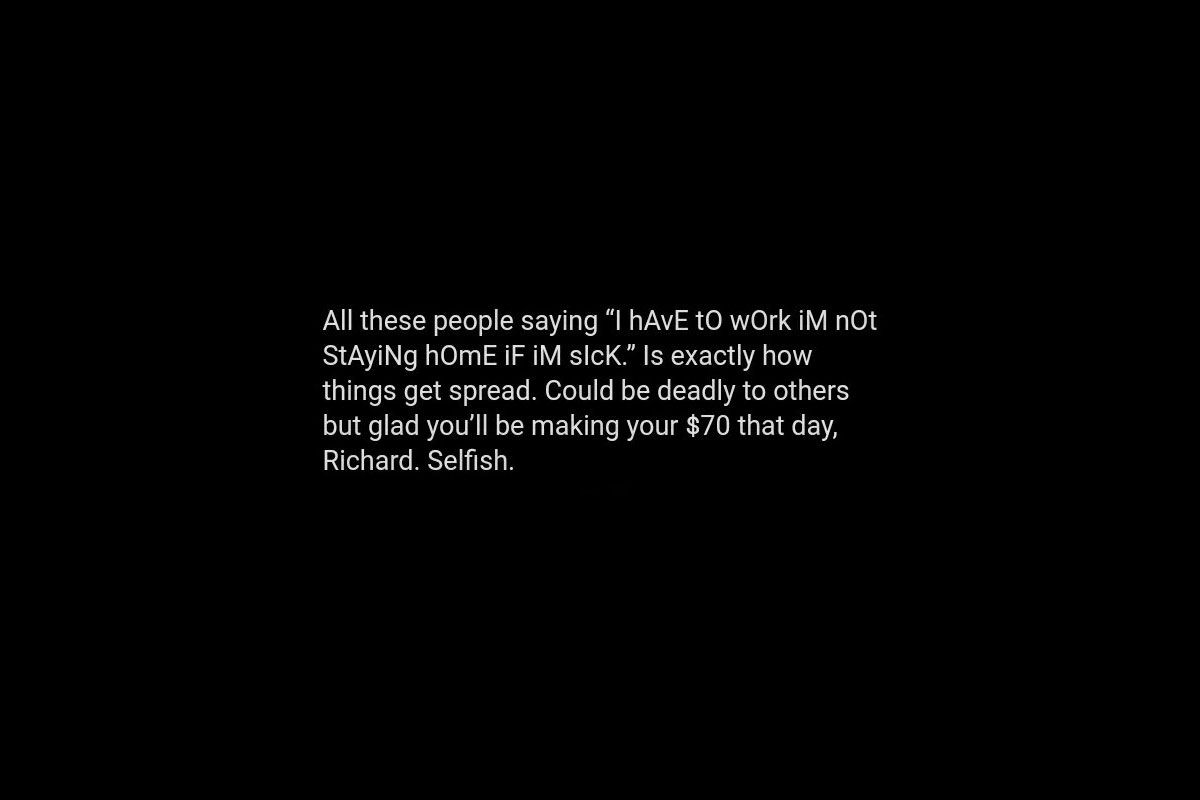 I found the above tweet this morning. Pretty sure it’s been deleted since then, because the original tweeter was getting dragged literally to death by the service industry workers of Twitter.

And rightfully so, because this is a goddamn stupid and privileged thing to say.

I worked in restaurants for like 15 years, but what I’m about to tell you is true pretty much for the whole service industry.

Almost no restaurant offers health insurance, and if they do, it’s trash that doesn’t cover anything. Despite Obamacare, this is still largely true. Which means that if you work in a restaurant, you almost certainly can’t afford to go to a doctor.

Most restaurants won’t let you call out sick, period, but if they do, they definitely won’t let you do it without a doctor’s note.

Most restaurant workers can’t afford to call out sick anyway because there aren’t any paid sick days, and they need the money to pay rent.

So. If you get sick, and work in a restaurant – or most any part of the service industry – you drag your sick ass into work anyway.

I’ve gone to work with the flu, the stomach flu, strep throat, bronchitis, all kinds of nasty, contagious shit. I’ve worked shifts while vomiting and having diarrhea several times an hour. I remember one night in particular where I had, I don’t know, bronchitis or some other crud with a hella bad cough. I remember at one point bracing myself with both hands on a garbage can, coughing so hard I could barely stand, coughing until I threw up. Then I washed my hands, rinsed my mouth, and went back out to my tables.

I had to. Rent was due, and I couldn’t afford to see a doctor, and I didn’t have insurance, and I wasn’t allowed to call out because there wasn’t anyone to replace me – which I couldn’t do in the first place because I needed the money from my shift.

The above events are so commonplace as to be completely unremarkable. Nobody even talks about it; that’s just how it is. That’s just how it is, universally, across the service industry, an industry which encompasses everything from the restaurants you eat at to the grocery stores where you get your food to the gas stations, to retail stores, to just about anywhere where someone asks you, “Hi, how can I help you today,” all across the United States.

And if COVID-19 does spread like wildfire across the US, which it will almost certainly do, it will, at least partially, do so because of these entirely avoidable circumstances. If the service industry had healthcare, a decent wage, benefits, and workers’ rights, we could head this off at the pass.

The next time you roll your eyes at folks who want a livable minimum wage (“$15+ an hour to work at McDonald’s?!”) or universal healthcare, maybe stop for a minute and think about that.