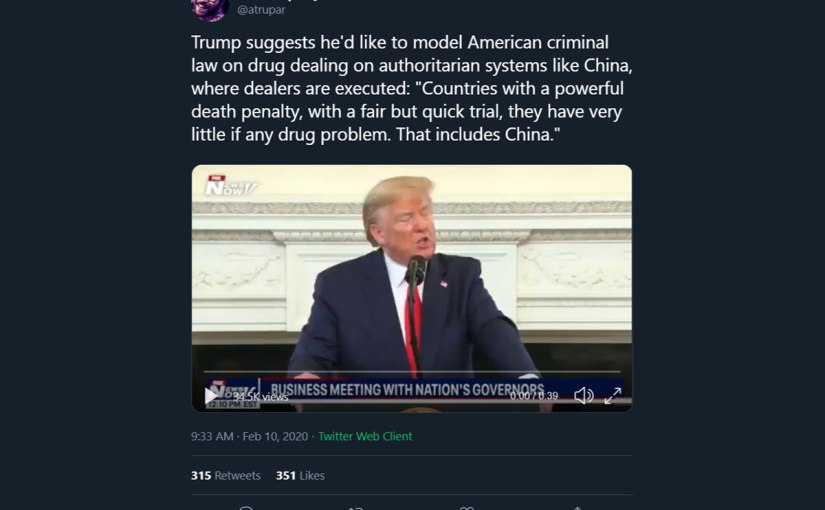 This is the president announcing that he’d like to murder drug dealers after a “quick but fair” trial. (Watch it here.) Y’know, like they do in China and Singapore. Trump was a big fan when Rodrigo Duterte, president of the Philippines, just up and started murdering drug addicts and dealers.

Who counts as a “drug dealer”?

When you think of a “drug dealer,” you probably have a specific image in mind, probably something like a black man in gang colors, the leader of a Mexican cartel, Al Pacino in Scarface, something like that.

Are you thinking about your buddy Bob who works at the factory with you and smokes a lot of weed when he goes home? Because depending on your state’s laws, that guy counts, too.

Weed is legal in Oregon, but if you’re carrying too much and get caught, you can still be prosecuted for intent to distribute. That is, they assume you’re dealing.

I know a person who got pulled over recently after a store run and had a big bag of weed in the car that they fully intended to smoke themselves over the next few weeks. But if this perfectly nice, job-having, responsible person had got busted with that weed, the cops and judges would have assumed they were a drug dealer and sent them to prison.

Is that who you’re thinking of when you think “drug dealer”? Because that’s who the law means.

If someone doesn’t want to go to the local weed store twice a week, should they be murdered?

I don’t smoke, but if I did, I would definitely hit the store once or twice a month and stock up, like I used to do with cigarettes. If I got pulled over and busted on the way home, my lazy ass would be going to prison for intent to distribute. And if Trump had his way, I’d get a “quick but fair” trial, and then I would be killed.

People like to think in jumbo-sized crayon primary colors with big thick lines and simple designs.

I’m not bashing on anyone when I say that – it’s just natural. That’s how our brains work. It’s a pattern that helps keep us safe – helps us generalize dangerous situations and learn to avoid them. Back in the caves, we’d see Oog get mauled by that one specific lion, and our brains would turn that into “large cats=bad,” and that helped keep us from getting mauled.

But that pattern of thinking does us a huge disservice when it comes to more modern-day situations. Things are a lot more complicated now than “don’t get mauled to death by large cats,” and you can’t make a law like “murder all drug dealers” without sweeping up half your families, neighbors and coworkers.

None of that even mentions the extensive racism problems inherent in this argument; how wildly, morally wrong the death penalty is to start with; the fact that the death penalty doesn’t even work as a deterrent; the socio-economic problems that lead to a life selling drugs and how you have to deal with that first if you want to solve the problem; or the fact that the main American drug problem that we’re dealing with right now is the direct result of years of over-prescribing opioids, how it turned people into addicts, and how when they couldn’t get them anymore they turned to heroin and meth. Or any of the numerous other issues that a dumb idea like “murder all drug dealers” doesn’t address.

OR whatever Trump’s idea of a “quick but fair” trial is. Because I’ll bet you literally any amount of money that it doesn’t match mine.

Nor does it address the very valid point that Trump is a goddamn fool, and that what he really wants is to be a fascist dictator who “solves” problems with the sweep of his hand by murdering people he decides he doesn’t like, which is what his “murder all drug dealers” bullshit is actually pointing at.

Also, do you seriously think China and Singapore don’t have drug problems? Because I can assure you, they do.