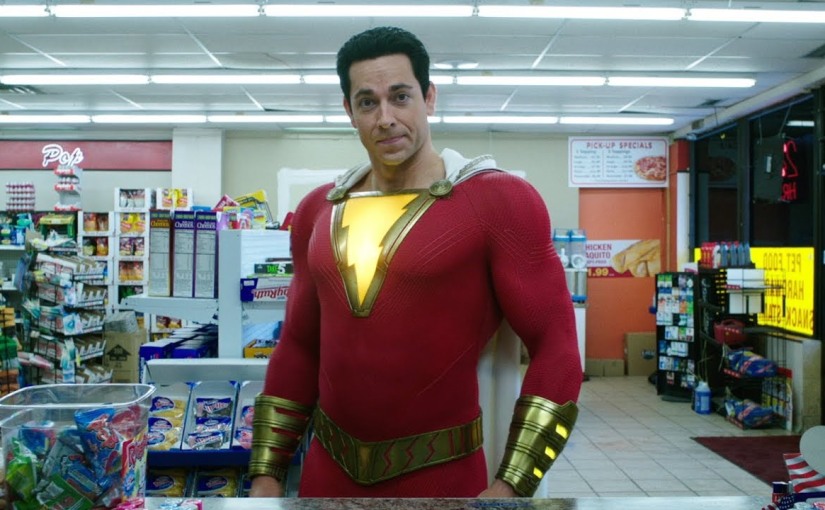 DC’s superhero movies have been mostly disappointing, so I finally swore off seeing them in the theater until they prove they can make one worth paying the $30+ for theater tickets. We haven’t been to the theater for a DC movie since Wonder Woman.

We got around to seeing the Justice League movie, whatever that was called, several months back, and that was… well, it was arguably a movie. We saw Aquaman a couple months ago and it was pretty, and funny in a few places, but overall it was, y’know, meh. I’m glad I didn’t pay theater prices to see it.

Shazam!, though. Shazam! was actually decent.

Shazam! seems to be aimed at the tween/young teen crowd. It has a coherent, meaningful plot (some of the emotional beats don’t completely land, but it mostly works). The actors were clearly having a great time. It’s funny (there were a couple of places that were laugh-out-loud funny), hopeful, and heartening. I’d give the movie a solid B+.

The first half of the movie is structured a bit weird and spends a lot of time with the villain, which on one hand is great because it makes the villain an actual character with motivations that resonate, but on the other hand I think it sucked some time out of Billy Batson’s story which is why some of the emotional beats for his character don’t exactly land as hard as they could. Sort of made it feel like the movie was spending a bit too much time being goofy and funny, and not enough time being heartfelt.

Overall though, fun movie. I loved the ending. The climactic twist got spoiled for me (Thanks, Tumblr, you asshole, you couldn’t have waited three more days to start posting Shazam! gifs, could you) and I was pretty annoyed about that because it would have been awesome to see that with no warning, but that wasn’t Shazam!‘s fault and besides that it was a hoot.

I do have one quick thing I want to point out that definitely needs a spoiler warning, though, so SPOILER WARNING. The next section has a SPOILER.

At the very end of the movie there’s a quick scene where Shazam has lunch with one of his foster brothers at their school, and it’s basically played for laughs, and it’s cute. But, it also has a brief sort-of cameo – Shazam brings Superman along to lunch.

(It’s a sort-of cameo because we only see Supes’ chest, basically, in the suit. Henry Cavil gave up the Superman job and DC hasn’t recast him, so they don’t actually have a Superman at the moment, which is why it’s shot like that.)

Anyway, Superman shows up with Shazam to have lunch at a high school with a disabled foster kid who’s being bullied. The Superman from Man of Steel, Batman V. Superman, and whatever the Justice League movie was called shows up at a high school to give a young kid who’s having a rough time some moral support.

Actual proper Superman, though, is absolutely the kind of dude who if Shazam showed up and was like, “Hey, I know we just met, but could you do me a solid, this kid could use a hand,” he would totally show up and have lunch at a high school to make a kid feel better about life.

So here’s this quick, cute scene played for laughs with a funny cameo… that is also a slap in the face to the DC movies that came before it and their shitty version of Superman. I think that’s a pretty telling statement, assuming they did that on purpose. And I kind of think they did, judging by the direction of this movie (and Aquaman, too, to some extent).

It gives me some hope for future DC movies, is all I’m saying. If we never see Zack Snyder’s shitty, hateful version of the DC heroes again, it’ll be too soon.