At this point, two years into the rolling dumpster fire that is the Trump administration, I’m pretty inured to the lunacy that spews forth from the White House and the GOP. I barely bat an eye when I hear horrendous news these days. The news could be like, “President Trump was tossing puppies football-style into a crowd of crying Girl Scouts today at his rally in Alabama…” and I’d be all, “Sure. Why not.”

But that New York Times op ed is a whole ‘nother level. 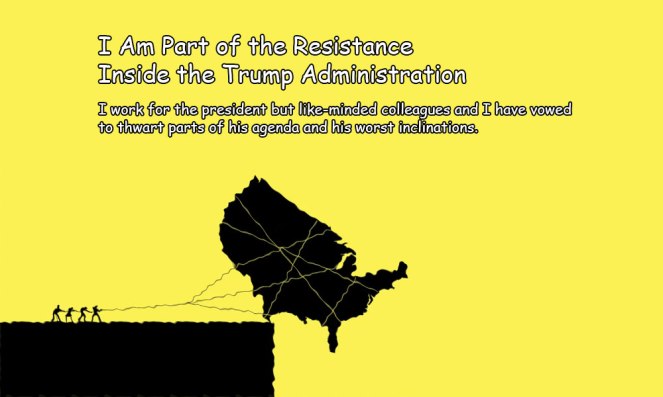 Let me start first with telling you that this op ed is a PR stunt. Attempt? It’s public relations, folks, straight-up “cover your ass”-type marketing. That’s all this is.

There may well be a “resistance” in the White House, such as it is. Dudes are probably stealing papers from Trump so he doesn’t sign them and whatnot – that’s how you manage an abusive narcissist when you can’t (or won’t) escape from them. You gaslight them and shine them on.

But the only reason you’re hearing about it in this op ed is because someone thought it would distract from and/or cover for the upcoming Bob Woodward book, and help the administration staff recover from the stain of Trump after he leaves office.

The second thing I want to tell you is that I am utterly agog that the New York Times went ahead and published this clear and obvious marketing attempt anonymously and as-is. Like… what? Are they serious?

Let me tell you about my journalism experience: I have nearly none. I worked at a student newspaper for like ten minutes several years ago. And even I know that this was a bullshit decision on the part of the Times opinion people. This “op ed” isn’t something you get and publish, it’s the beginning of a serious news article. This is the kind of thing you get in your inbox and say, “Oh ho! I feel a 1500-word exposé coming on!”

Maybe they thought publishing the op ed was the first step in the 1500-word exposé? Like, “First we’ll publish this thing as-is, then we’ll destroy it on the front page! Double the ad clicks, double the fun!” I dunno. It feels like publishing this thing as-is, without any context or reporting, is a pretty irresponsible thing to do.

Having said all that, let’s take a look at this steaming brown streak on the Times’ Opinion page.

The dilemma — which he does not fully grasp — is that many of the senior officials in his own administration are working diligently from within to frustrate parts of his agenda and his worst inclinations.

I would know. I am one of them.

I feel like this is a crime? I mean, it’s certainly a fire-able offense. Later on they’re talking about stealing papers and whatnot from him so he couldn’t sign them and would forget the orders he wanted to give, which is a whole thing by itself, but it feels like doing that should be some kind of actual crime. I don’t know that it is, per se, but it seems like deliberately subverting the orders of a sitting president should at least result in a stern and lengthy chat with lawyers, right?

Don’t get me wrong. There are bright spots that the near-ceaseless negative coverage of the administration fails to capture: effective deregulation, historic tax reform, a more robust military and more.

FYI, these are not bright spots. We like clean air and water. I mean, in general, as a nation, statistically. We’re down with that plan. Also? That wasn’t tax reform, it was a cash grab. But whatever, I guess. All this bit is meant to do is virtue signal at Republicans.

Meetings with him veer off topic and off the rails, he engages in repetitive rants, and his impulsiveness results in half-baked, ill-informed and occasionally reckless decisions that have to be walked back.

“There is literally no telling whether he might change his mind from one minute to the next,” a top official complained to me recently, exasperated by an Oval Office meeting at which the president flip-flopped on a major policy decision he’d made only a week earlier.

The erratic behavior would be more concerning if it weren’t for unsung heroes in and around the White House.

No, no. The erratic behavior is concerning, full stop, no justification. Tossing a crinkly ball of paper in the corner and distracting the cat from knocking a second full glass of water off the table doesn’t mean the first full glass of water didn’t hit the floor and smash everywhere.

It may be cold comfort in this chaotic era, but Americans should know that there are adults in the room. We fully recognize what is happening. And we are trying to do what’s right even when Donald Trump won’t.

Guys. This isn’t “cold comfort.” This is no comfort at all. If you were the “adults in the room,” you’d be doing something to stop the child from having his tantrum. Trump’s behavior and “policies” are a problem; you’ve admitted that yourself right here in this op ed. Adults. Fix. Problems.

Given the instability many witnessed, there were early whispers within the cabinet of invoking the 25th Amendment, which would start a complex process for removing the president. But no one wanted to precipitate a constitutional crisis.

Going back to what I said about adults fixing problems, and in light of this op ed and what’s in Bob Woodward’s book, invoking the 25th Amendment is exactly what this asshat and their compatriots in the Trump administration should have done.

The bigger concern is not what Mr. Trump has done to the presidency but rather what we as a nation have allowed him to do to us. We have sunk low with him and allowed our discourse to be stripped of civility.

We have “sunk low” with Trump and the bad result of that is that our discourse isn’t civil anymore? Are you fucking kidding me here? You put children in cages and when the backlash forced you to stop doing that you lost like 500 of them. You’re ramrodding a shady, pro-torture, women-hating, minority-hating jackoff who thinks presidents can’t be indicted or investigated into a SCOTUS seat in a flailing attempt to save your president’s ass. You outlawed entire nationalities from entering the US. You’re subjugating women and disenfranchising non-whites. You’re making it easier to steal elections and working with foreign enemies who want to harm America and its democracy. And the problem with Trump is that our discourse isn’t civil anymore. Fuck you for all eternity, Mr. Op Ed Writer.

Seriously. With something that has sharp edges.

Sorry, no comments here. They attract spam and bad actors, and they’re a PITA to moderate. Talk to me on Mastodon, Tumblr, or Twitter, instead.