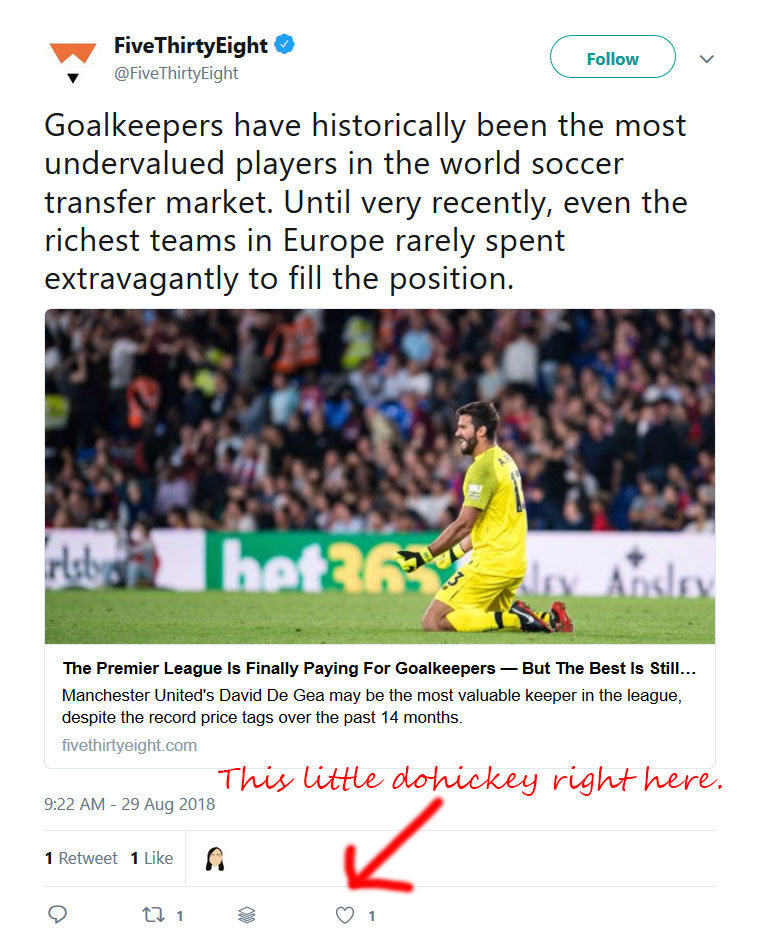 It wasn’t that big of a deal, but we’d all been using the feature one way and Twitter up and changed the whole thing, and it bunched up a lot of panties for awhile.

But, for the last couple of years, Twitter’s been doing this thing where if you “like” someone’s tweet, it’ll inject that tweet with a little note that you liked it into your followers’ Twitter stream.

Which is still… I mean, it’s annoying, but it’s not that big of a deal. “Likes” and “favs” were always public. You could always click through to someone’s Twitter profile and see their likes or favs if you wanted to. You just didn’t have to deal with them junking up your Twitter stream.

Here’s the thing though: If you follow a bunch of people on Twitter, it’s because you like or are interested in those people and/or what they have to say. And Twitter has a function called a “retweet,” where if you see a tweet that interests you for some reason, you can click “retweet,” and share that out to your followers. So if I’m following someone, and they retweet someone a few times and I like or am interested in what that new person says, I follow that new person, too. It doesn’t take very long for you to be following a lot of the same people as everyone else in your particular niche interests.

So, the retweet function tends to be pretty “in the moment” when folks on Twitter use it. You might see the same thing retweeted a few times, but it’s generally happening while that tweet is interesting or relevant, so it’s part of the topic of the moment. It helps you gauge interest.

“Likes,” however, get used differently. You “like” something because it’s funny or smart, or as a show of support, not because you necessarily want to show it to everyone else. Also, people like all kinds of random things, whereas they generally retweet on topic. So, you’re rolling through your Twitter timeline, and you generally tweet about politics or information security or fuzzy kittens or something. If you see something on your particular topic – politics or kittens or whatnot – you retweet it. Because it’s on topic for you. But as you’re scrolling, you may also like a bunch of things that have nothing to do with your usual topics.

And now suddenly your followers are being hassled with a bunch of off topic junk.

Worse, since your entire circle of followers are all pretty similar-minded, odds are good that they’re following a bunch of other similar-minded people who are all also going through their timelines, retweeting the relevant bits and liking random whatevers… but often all the same random whatevers. Because we’re all relatively similar, so we all think that little quip someone made was clever or funny.

The end result is that I spend the next three days with the same liked tweet showing up in my timeline over and over and over again as new people find it.

This doesn’t happen with retweets. It only happens with likes. It’s just a function of how people use the feature. And it is hella annoying.

There’s no real way to turn this off or stop it from happening. You can go through your timeline and use a dropdown menu on Twitter to tell Twitter that you don’t like a particular tweet. If you go through your timeline and do that for each of the liked tweets that have been injected into your timeline, Twitter will stop showing them to you for a few days. But they always, inevitably, like an outbreak of herpes, come back. I don’t know how it’s hitting everyone else, but I find it wildly frustrating.

There are a few workarounds to get rid of likespam (several methods listed here), but nothing that’s, y’know, user friendly for most folks.

The reason I’m telling you all this is that it points to an ongoing problem with Twitter management: The people who run Twitter have no goddamn idea how or why people use their service. They don’t listen to their users. They add features no one wants and refuse to add features everyone needs. They break functions everyone relies on, shift timelines to be algorithmic instead of chronological, and generally muck up everything related to how their users actually use Twitter.

Twitter is about news and conversations that are happening right now, in the moment, about a given topic. And every new feature, or removal of an old feature, that Twitter has instituted in the last few years, has been about breaking the thread of that conversation. It boggles the mind that Twitter CEOs can be so blatantly ignorant of what their service does and how it’s used.

And all of that is entirely aside from the fact that Twitter is doing nearly nothing to remove abusive users, allows their platform to boost nazis, and sundry other little issues that all lead directly to making Twitter the hellhole cesspool that it is.